I’ve made many quilts with strips and scraps and scraps of strips. It goes without saying that the goal is to use some of the fabric in my stash and create a beautiful quilt.

I began this quilt about a year ago.

The quilt was achieving the look I wanted – colors bleeding into one another to form an asymmetrical rainbow – and I had great plans! But the corners were very thick with all those pieced parts and since I didn’t paper piece the blocks I had some wave in the quilt. But mostly the corners were making me crazy! They were unruly. I was starting to dread the entire project, including the quilting, and I was nowhere near quilting the darn thing.

So I put the quilt and all the extraneous parts away in a colorful little box.

Except for a few small pieces that taunted me for a year.

Then a few weeks ago I took a small square of strip pieced pink fabric and put a yellow border on it.

I liked the results but wasn’t quite sure what to do or where to go so I just looked at the block for a few weeks.

Then! An a-ha moment! What if I take apart my “rainbow” quilt and border each square in a complimentary color?  Armed with my seam ripper at a neighborhood meeting and a completely uncomfortable chair, my quilt was deconstructed into all these little parts. 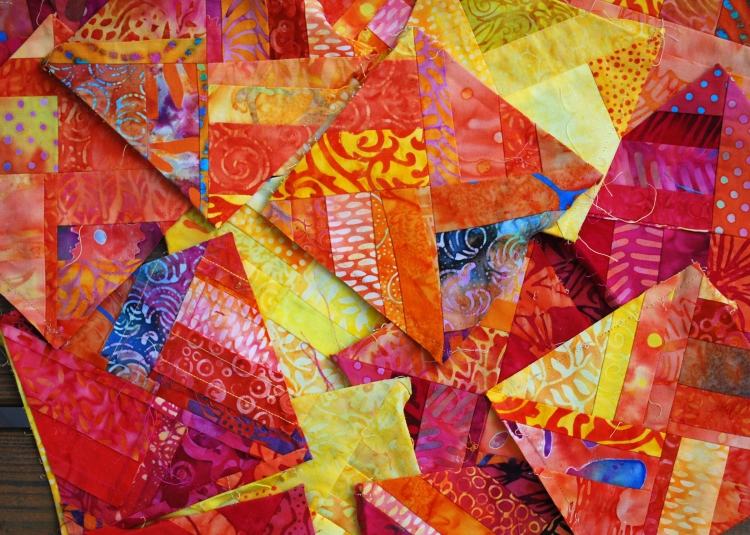 I ironed all the blocks and starting sewing borders on my “new” project. Then I decided that a complimentary border was too orderly for me, so I mixed them up to get this.

I bordered three blocks, put them on the design wall but wasn’t happy with how my quilt looked.

I was, once again, a bit frustrated…then I looked at the rather large pile of red squares I’d made and put them on my wall. I didn’t want to make more blocks. So far I have this and I really like it.  I’m pondering a golden yellow sashing with red cornerstones but really I haven’t settled on anything yet.

I think it’ll look good. What do you think?